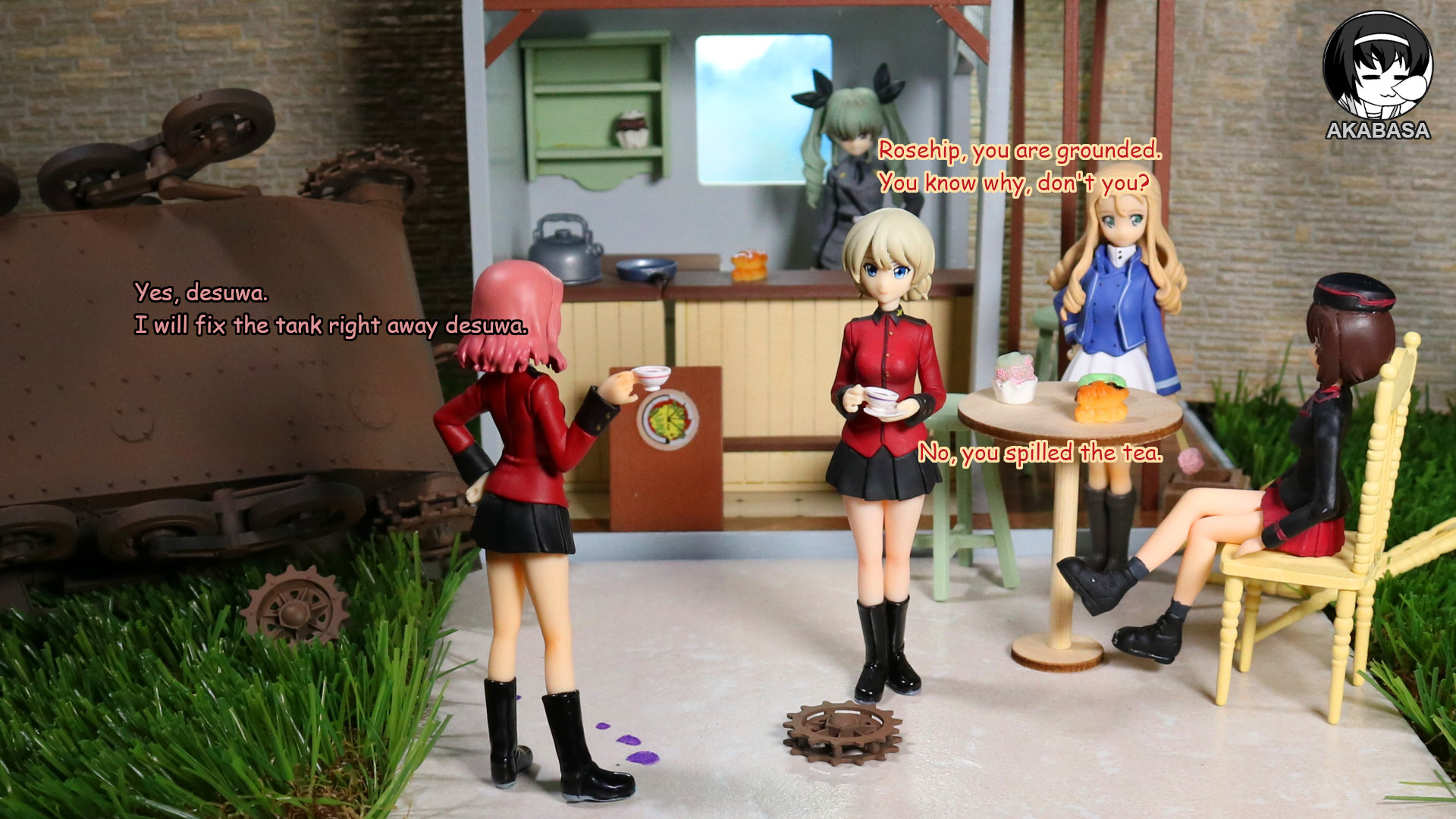 There are a lot of ways to make some comical scenes with Roseship. I suppose this is one of them.

Speaking of Rosehip, the anime doesn’t really cover her. In Ribbon warrior though, she gets a fair amount of coverage along with Pekoe. She (Rosehip) also makes an appearance in Saga of Pravda as well.
She is a person who should have entered Chi-Ha-Tan but instead somehow entered St. Gloriana. She likes to charge and loves speed, both of which are fine recipes for disasters. And disasters she does cause. I think the most famous one is crashing into Clara’s T-34 during a practice match. There was a large explosion but neither girl was hurt.

This scene has several props. I am going to list some of more important ones. The first one is a doll house. Yes, a doll house. You see, I’ve found out that doll houses are around 1/16 scale which means they are just perfect for these kind of purposes.

Right now, I have two doll houses, and this is one of them which is a food stall of some sort. I’ve also made this an Anzio stand with Anzio emblem.

This tank does not strictly belong to any GuP faction but I’ve made this belong to Chi-Ha-Tan. It is a Japanese tank after all. This is a really small tank. Even at 1/16 scale, it’s still very small. The figure is a 1/20 scale one, but I think those two fit well. The figure is not on the scene.

Finally, two patches of artificial glass. Those are probably my most used props. And there is a paper brickwall prop. The brickwall is for model train scenery.

Combine those and below is what you get.

Originally, I used red paint as tea drops but felt that those looked like blood which is plausible given the accident Rosehip caused. Thus, I changed it to purple.

Rosehip rushes in her tank, flips it and it goes haywire. Darjeeling, obviously, scolds her, but not for the accident but for dropping tea.
Which makes Marie amused, thus the look and stare at Maho. Not sure you notice it but she also stood up in haste to avoid being hit by the tank. You may see a fallen chair next to her. Meanwhile, Maho is cool as a cucumber. She is Maho after all. 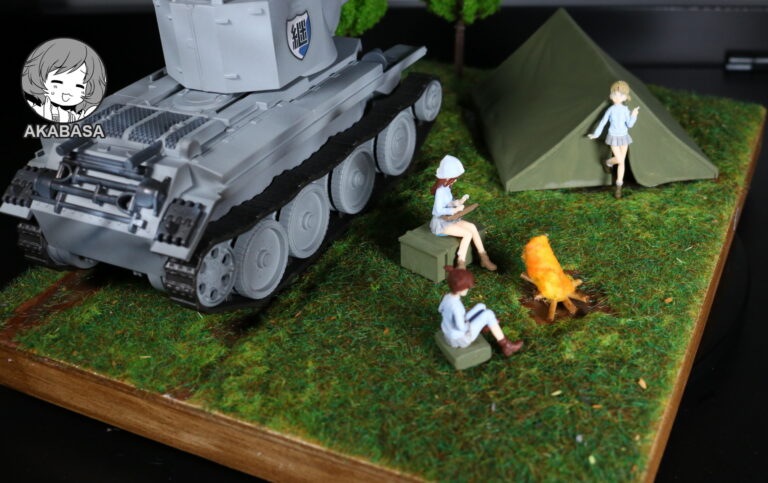 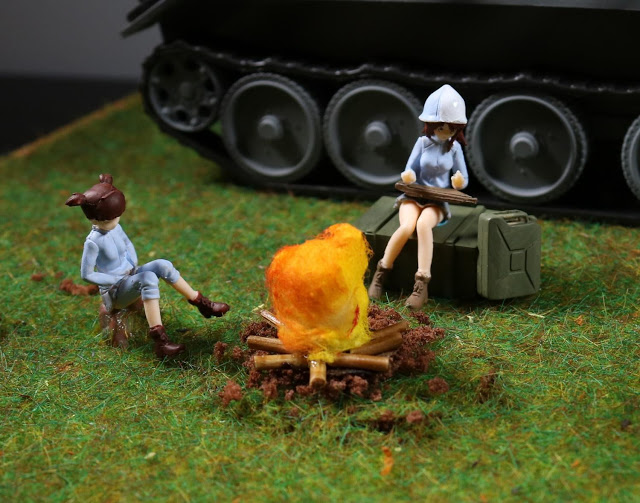 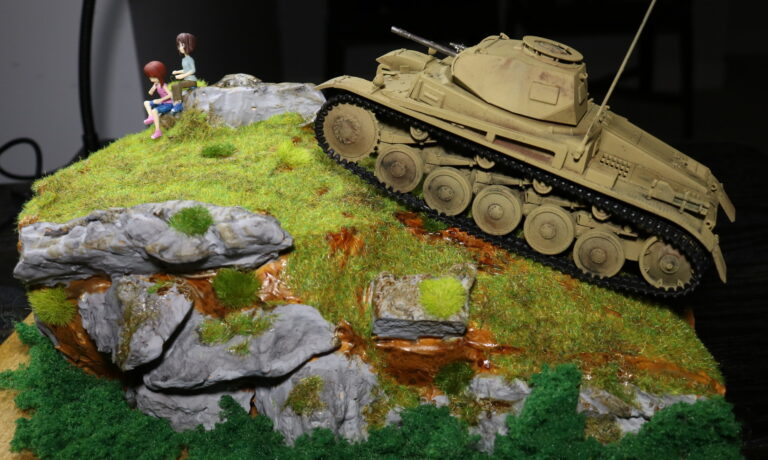 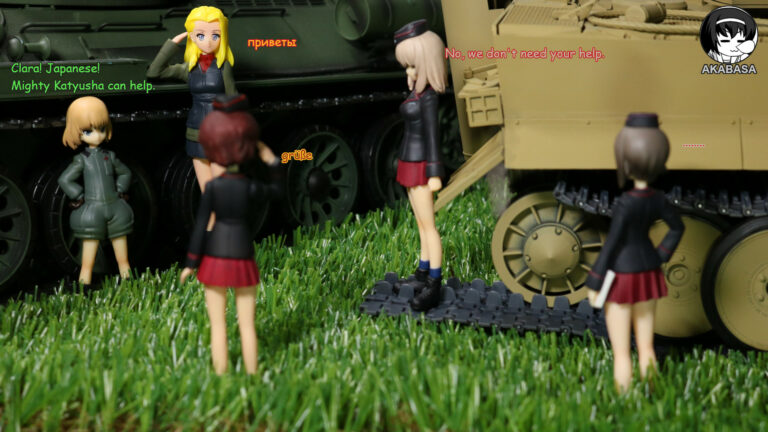 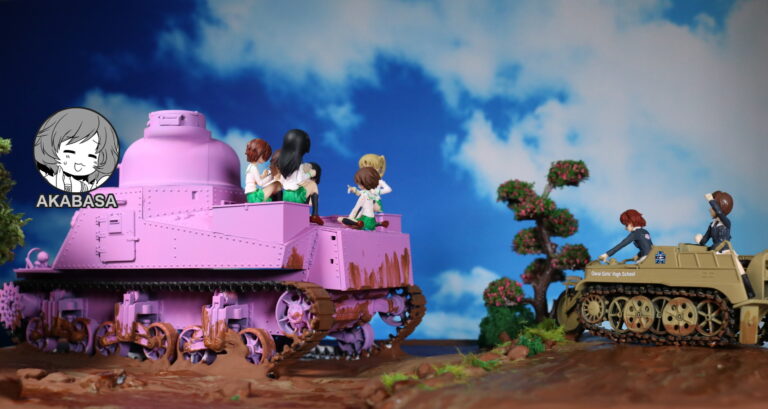 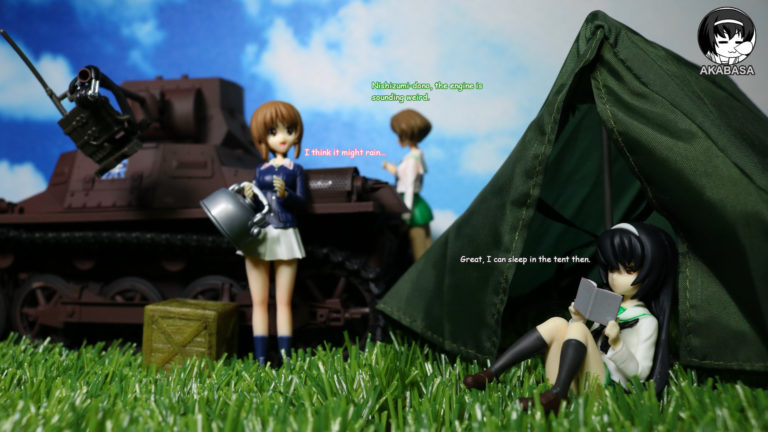